Here’s a short clip, because we needed some Joseph Campbell today. You can read the full transcript of Joseph Campbell and the Power of Myth — ‘The Hero’s Adventure’ (episode one) here: http://bit.ly/1bhqY02 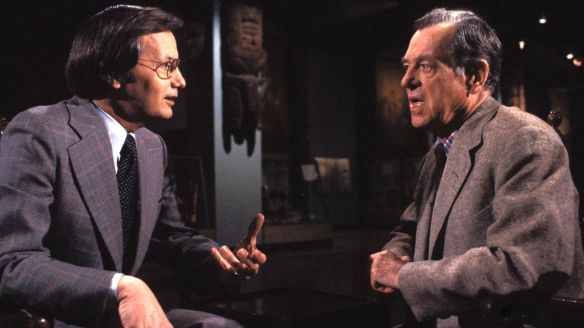 Like so many others, I’ve been puzzling over the Trump phenomenon for months. It seems like every journalist, pundit, psychiatrist, psychologist and armchair psychologist has something to say about the man. Understandably, they are trying to figure out what kind of person he is and why he is so popular with millions of Americans, including nearly half of the Republican Party.

My own interest is undergirded by the work and ideas of the late Joseph Campbell, a foremost interpreter of world mythologies and author of The Hero With a Thousand Faces. It was said of Campbell that “he could make the bones of folklore and anthropology live,” as millions of viewers would learn in watching the classic PBS series Joseph Campbell and the Power of Myth. [Disclosure: I knew Campbell from my alma mater, Sarah Lawrence College, where he taught for 35-plus years. Many years later I served as executive producer of the Campbell-Moyers series.]

Campbell’s gift was to interpret the themes and forces underlying myths, stories and legends and how they play out in our lives. He illuminated the interior pathways of the mind which guide human behavior and action — a psychological roadmap within each of us which is nonetheless dark and mysterious to most of us.

One of the dominant highways on that inner map is the Hero’s Journey. The hero appears as a universal character in all cultures, everywhere, throughout human history, in myths and legends. It is so universal a theme that Campbell, along with other scholars and psychologists, called it an “archetype.”