While on a working vacation in Cancun, I had to respond to a couple of State Senators in the Hoosier state pushing a bill to promote Creationism as an alternative to reality in public schools. 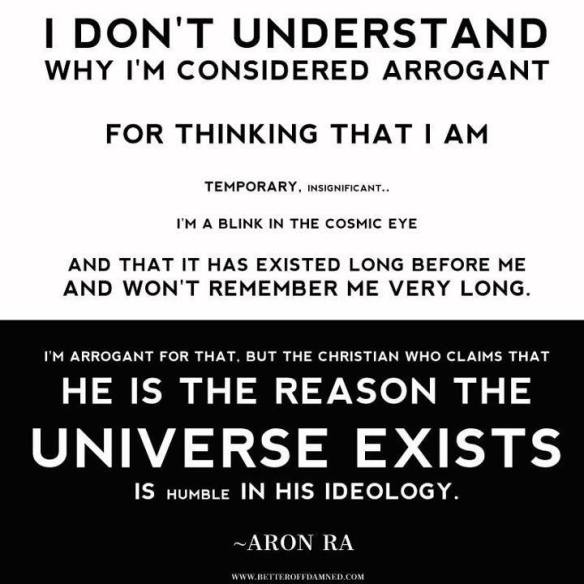 It is by our beliefs, knowledge and values that we define ourselves, and are judged by others. Many are willing to kill, or be killed for such abstract concepts without even a rudimentary understanding of the abstraction for which they are all too willing to meet their maker. Atheism, agnosticism and antitheism are three commonly misunderstood terms that describe beliefs, knowledge and values respectively. Analytically defining each word will show a direct correlation between each term, and their respective abstract concept for which they describe. It will prove beneficial to any reader’s future conversations, correspondence, or consternations concerning atheism, agnosticism, and antitheism.

Atheism is the lack of belief in a deity, which implies that nothing exists, but natural phenomena (matter), that thought is a property or function of matter, and that death irreversibly and totally terminates individual organic units. This definition means that there are no forces, phenomena, or entities which exist outside of, or apart from physical nature, or which transcend nature, or are “super” natural, nor can there be. Humankind is on its own. (Atheism)

When it comes to a belief in the supernatural one must either be a theist, or an atheist, for no other alternatives are available. This is not a false dilemma. One cannot kind of, sort of believe, but not really. It would be analogous to kind of, sort of being dead; it is not possible. One is either dead or alive. Likewise, one is either a theist or an atheist. In both cases there are no other alternatives available. Atheism is concerned with belief.

Often, because of the negative emotive connotations associated with the word atheist, people will incorrectly use the term agnostic to describe their lack of belief in an intellectually vain attempt to avoid being labeled the pejoratively and socially stigmatic term atheist. It is intellectually dishonest to do so, for “agnosticism is the position of believing that knowledge of the existence or non-existence of god is impossible. . . . The agnostic holds that human knowledge is limited to the natural world, that the mind is incapable of knowledge of the supernatural” (Agnosticism). Agnosticism is not an undecided position concerning belief between a theist, and an atheist. As previously shown theism, and atheism describe belief. One cannot use the term agnostic as a surrogate to describe one’s belief. Agnosticism is concerned with knowledge.

“Antitheism is active opposition to theism. . . . it typically refers to direct opposition to organized religion, or to the belief in any deity” (Antitheism). An antitheist values truth over unity, while it is observable that theists value unity over truth. For example, an antitheist will overtly, and without reservation, claim that anyone who believes in the story of a talking snake is irrational. Conversely, the theists would not concern themselves with the antitheist’s claimed irrationality of a talking snake so long as the unity of their cult, church, or community is maintained.

Most antitheists are so because they “take the view that theism is dangerous or destructive” (Antitheism). Many antitheists are strident in their opposition to theism. The late Christopher Hitchens who in his 2001 book Letters to a Young Contrarian, wrote, “I hold that the influence of churches, and the effect of religious belief, is positively harmful” (Antitheism). Antitheists look at the negative effect of religious belief on society. They believe that the influence of the churches is unnecessary for positive effects to be made in society. Secular institutions such as the Red Cross, Doctors without Borders, Planned Parenthood, Amnesty International, PlanUSA, etc. do so demonstratively with neither a need for the promise of salvation, nor the fear of damnation. Antitheism is concerned with values.

In a predominantly nonreflective consumer culture, of which one may easily argue we are part, it is intellectually undemanding to understand how the existence of religious privilege, and its negative corollary impact, escapes “folks.” In Lewis Schlosser’s 2003 article “Christian Privilege: Breaking a Sacred Taboo,” published in the Journal of Multicultural Counseling and Development, he explains:

One possible explanation for the existence of Christian privilege is the notion of a “nonconscious ideology” (Bem & Bem, 1970, p. 89). Bem and Bem first defined the concept of a nonconscious ideology to describe how implicit beliefs and attitudes are used to maintain the status quo in terms of gender inequality. They used the analogy of a fish and its environment to illustrate their concept of nonconscious ideology. A fish does not know its environment is wet, because that is all it knows and all it has ever experienced. The fish has no idea that anything else exists besides water because it has never had to think about any other possibilities. (Schlosser 47)

The nonreflective folks that constitute the majority of contemporary society are too busy chasing the shiny objects of their next desires to reflect long enough to recognize the nonconscious ideology of religious privilege, for most folk have no idea that anything else exists; however, some salient spectres are not so translucent.

Religious Privilege may be used as a defense to circumvent one’s civic “duty” to country. Richard Dawkins addresses this in his “Undeserved Respect” section of his book The God Delusion:

By far the easiest grounds for gaining conscientious objector status in wartime are religious. You can be a brilliant moral philosopher with a prizewinning doctoral thesis expounding the evils of war, and still be given a hard time by a draft board evaluating your claim to be a conscientious objector. Yet if you say that one or both of your parents is a Quaker you sail through like a breeze, no matter how illiterate you may be on the theory of pacifism or, indeed, Quakerism itself. (Dawkins 21)

Interestingly, it is worth noting that the Republican politician, Richard Milhous Nixon was a Quaker. Although he never saw combat, he did serve in the United States Navy, and did not claim conscientious objector status, but as a Quaker he well could have. Had he done so, this would not have disqualified him from later becoming the 37th President of the United States, and as Commander-in-Chief of the United States Military sending 21,041 non-conscientious objectors to their ultimate deaths in Vietnam (Wiener). Religious privilege is not limited only to those threatened by death on the battlefield, no, it is also reserved for those whose health is threatened here in the Community Colleges of California.

There are various fee waiver programs available to college students. One such program offered in California Community Colleges is the Board of Governor’s Fee Waiver Program (BOGW). This is primarily awarded to those that can prove a financial need based on low-income—not religious privilege. “For eligible California residents, the Board of Governors (BOG) Fee Waiver permits enrollment [tuition] fees to be waived” (BOG). Another fee waiver program available to California Community Colleges students is the Health Fee waiver. “However, provisions in the Education Code . . . exempt students from the health fee who depend exclusively upon prayer for healing in accordance with the teachings of a bona fide religious sect, denomination, or organization” [emphasis added] (Bruckman). To be clear, a struggling college student, in whatever dire circumstance they may be bound, may live with constant hunger pangs wondering from where the next meal is going to come, but because they do not depend exclusively upon prayer for healing must pay a Health Fee. However, this struggling college student’s wealthy classmate, who is not burdened with such unfortunate circumstance, that claims to depend exclusively upon prayer for healing would have his/her Health Fee waived. This is pure, in-your-face religious privilege, and if one were to demand a revocation of such blatant injustice the reactive cry of a “war on religious freedom” would be as predictable as Roman Catholic Bill O’Reilly’s annual cry of the “war on Christmas” coupled with his simultaneous silence on the pandemic of predator priests raping children.

Child rape is considered such a vile act that even among prisoners child rapists are often segregated from the general population for protection of their lives. However, child rape is no so reviled when committed by a Catholic Priest. In fact, religious privilege acts a refuge for the priesthood with total disregard to their victims. In his book, God Is Not Great: How Religion Poisons Everything, Christopher Hitchens implicitly addresses how we, as a nonconscious ideological society, euphemistically allow religious privilege to label Catholic Priests guilty of child rape instead as child abusers:

Again, how shall we reckon the harm done by dirty old men and hysterical spinsters, appointed as clerical guardians to supervise the innocent in orphanages and schools? The Roman Catholic Church in particular is having to answer this question in the most painful of ways, by calculating the monetary value of child abuse in terms of compensation. Billions of dollars have already been awarded, but there is no price put on the generations of boys and girls who were introduced to sex in the most alarming and disgusting ways by those whom they and their parents trusted. “Child abuse” is really a silly and pathetic euphemism for what has been going on: we are talking about the systematic rape and torture of children, positively aided and abetted by a hierarchy which knowingly moved the grossest offenders to parishes where they would be safer. (Hitchens 227)

The fourth estate of our nonconscious ideological society extends its religious privilege not only euphemistically, but quantitatively as well. Recently, this was evident in the national media’s asymmetrical coverage of the “child abuse” verdicts of former Penn State college football coach Jerry Sandusky and U.S. Catholic Priest Monsignor William Lynn.

On that same day, within hours of each other, in a landmark clergy-abuse trial Monsignor William Lynn, a name not even recognized by most fundamental Catholics, was convicted of child endangerment making him the first U.S. church official branded a felon for covering up abuse claims. A July 16, 2012 Google search of “William Lynn verdict” yielded a News results total of 1,540, and “Monsignor William Lynn verdict” yielded 1,440 News results. Not only did the overall News results decline, but also noticeable was that the News results total decreased when William Lynn’s “religious” title “Monsignor” was prefixed to his name.